We are constantly monitoring the impact of COVID-19 on travel as well as the health and safety of our clients. If you have any questions about the situation, we are a phone call away. (303) 317-6945

The Hidden Secrets of Your Airline Boarding Pass – Part 2 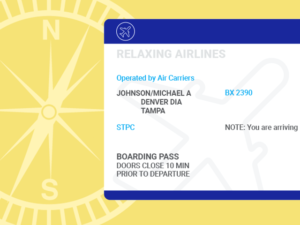 As we discussed last week, understanding the codes and numbers shown on your airline boarding pass is a key step in enjoying a smoother more hassle free journey.

Starting at the top left is generally where your name will appear. In this same area the various status qualifications you may have will also be displayed. These may include such things as your airline loyalty level status (if any) and any TSA status programs you may be enrolled in such as TSA Pre Check or Global Entry.

If a flight is codeshared – meaning you bought the ticket with one airline but the flight is operated by another partner airline, a line reading – Operated by….Airlines – will display in this general area as well. This will show you the actual airline flying the route.

The flight number is determined by the airline, using a complex algorithm that takes into account past and current airline flight numbers, as well as things like other airlines with similar sounding numbers scheduled to fly through the same airspace at the same time. This helps avoid potential confusion with pilots and air traffic control.

Other things to be aware of with your flight number are:

Below this information may be a code…. STPC…. which means you have a stopover of generally longer than a few hours and the airline will pay for necessary needs caused by this stop such as perhaps a hotel stay. A second type of stopover is normally displayed on the right side of the boarding pass which we will discuss next week.

This information will be followed by your showing your flight cities that you are flying to / from and your date of flight.

Open Jaw ticket information – which is where you depart from one city but return to a different city, will normally display under your flight information. Open Jaw itineraries are usually utilized on extended trips.

Next week we will continue our breakdown of the pass by looking at the information that generally appears on the right side of the boarding pass. We invite you to come back then to discover those hidden secrets on your journey to becoming an airline ninja!

Copyright Travel N Relax Inc or Rights Holder. All rights reserved. You are welcome to share this material from this page as long as it is attributed to Travel N Relax Inc, but it may not be published, broadcast, rewritten or redistributed.