We are constantly monitoring the impact of COVID-19 on travel as well as the health and safety of our clients. If you have any questions about the situation, we are a phone call away. (303) 317-6945 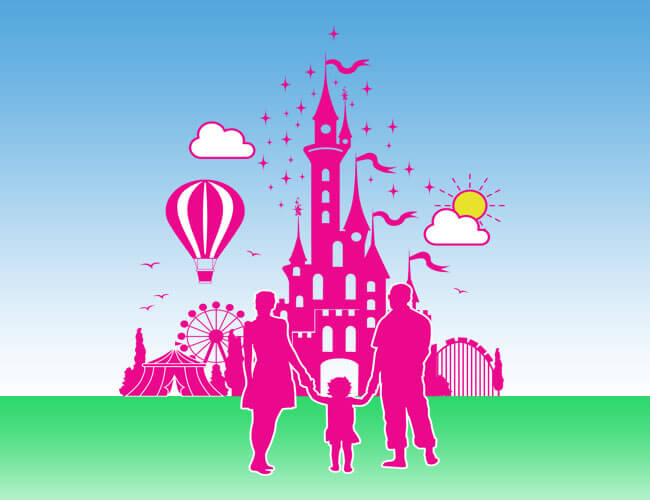 They’re the happiest places on Earth and both make incredible family vacations you’re sure to cherish. The best part about Disney is that it’s fun for all ages, so whether it’s you and some friends looking to go on a group vacation, you and your significant other getting away for a spell, or the whole family traveling together, you’re sure to get lost in the magic and wonder. The first decision you need to make before going on a Disney vacation is deciding which of the two theme parks you’re going to go to: Disney World or Disneyland?

Both offer incredible fun, shows, rides, and chances to meet your favorite characters and experience Disney in a way like no other. However, for those who are not aware, the two parks have different attractions and rides for you to enjoy; they’re also across the country from each other: one in Anaheim, California, and the other in Orlando, FL. From Colorado, heading to Disneyland isn’t as long of a trip as the one to Florida, but it isn’t that much longer. A flight to Anaheim is about 2.5 hours; a flight to Orlando from Denver is about 3.5 hours. For travelers with younger children, the shorter trip may be more appealing.

The next big concern for most people choosing between Disneyland and Disney World is the cost of the adventure. At the moment, Disneyland and California Adventure remain closed due to COVID-19, but they plan to reopen at the end of April 2021 to California residents and visitors from other states somewhat later, pending state guidelines. Disney World reopened several months ago and is slightly more expensive than Disneyland. However, at nearly 50 times the size, Disney World has a lot more to offer than its Californian counterpart, but we’ll get to how large the parks are and what they house in a minute. Both parks offer free admission to children under the age of three (3), and both parks offer reduced costs overall for multi-day ticket purchases – the longer you stay, the less it costs per day.

Both parks share a few rides, such as Splash Mountain and It’s a Small World, but for every ride that exists at both parks, each park does it a little differently so you never have the same experience, adding to the fun and excitement. Disneyland has roughly 25 rides at any time (accounting for refurbishment) across two parks, Disneyland Park and Disney California Adventure. For shopping, dining, and a little relaxation, Disneyland offers Downtown Disney to enjoy.

Disney World, on the other hand, has roughly 50 rides spread across four parks to play in: Magic Kingdom, Animal Kingdom, Epcot, and Hollywood Studios. Analogous to Downtown Disney, Disney World offers up Disney Springs for additional shopping, dining, and entertainment. The open-air plaza is a nice way to spend the afternoon into the evening and to catch some new takes on classic entertainment.

Each park boasts fantastical entertainment in the forms of shows and parades where the casts and characters bring magic to your world – and the fun doesn’t end just when the sunsets. Disneyland goers can enjoy the World of Color show (season permitting) and Disney World often offers firework shows over the castle.

There are plenty more details and differences to go over with each park to help you make your decision and we’d be happy to discuss all of them with you! Contact our Denver travel agency to speak with a representative regarding booking your next Disney trip and how we can help you choose the right theme park for your wants and needs. 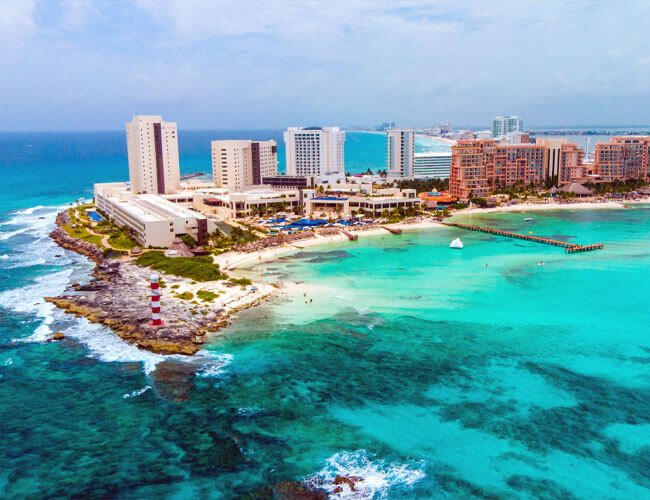 Are you dreaming of crystal clear blue waters washing over white sandy beaches while you sip a tropical drink? Do you want to lie in the blazing sun to work on that tan (don’t forget to wear sunscreen—we don’t need to ruin a trip with a burn)? Does local cuisine, especially incredibly fresh seafood, excite your palate and get your stomach rumbling?

Well, it sounds like you’re just about ready to look into your honeymoon or next vacation in Cancun. However, don’t think that this just a trip for couples; plenty of friend vacations and group vacations have made lasting memories in Cancun. No matter who you’re going with, we’ve compiled a quick guide for the things you need to know when taking a trip to Cancun.

You may have heard some tales that Mexico is a dangerous place; while certain areas may pose more threats than others, Cancun is entirely safe and friendly to tourists, especially if you book an all-inclusive package at a resort. There may be some pockets you should avoid, but they are far and few between, and we can go over them in more detail when you book your vacation through our Denver travel agency.

The beaches are beautiful

Get ready for bright sunshine, warm white sands, and cool cerulean waters when you head to the beaches in Cancun. There’s nothing quite like roasting in the sun to get your tan a deeper shade and then hopping in the waters to cool off. However, the sun in Cancun is very powerful, and you absolutely need to use sunscreen to avoid skin damage. Additionally, be aware that the undertow in the water can be strong, so take extra caution when you go for a dip!

There’s plenty of food to enjoy

From lavish restaurants to local holes in the wall, there is no shortage of delicious food to try and enjoy while vacationing in Cancun. While they are known for their seafood, their meats, cheeses, and other dishes are not to be overlooked! Don’t forget to get some dessert while you’re at it.

The sights away from the resort areas are easily accessible

Want to go for a swim in a gorgeous, natural swimming hole surrounded by cliffs and plants, or visit the spectacular Mayan pyramids of Chichen Itza and temples of Tulum? It’s a quick day-trip away when you’re in Cancun. If you feel the need for some retail therapy, there are a few flea markets and shopping centers to pick up locally made crafts and trinkets to remember your trip!

Cancun can be very budget-friendly

If you want to go all-out on your honeymoon, there’s a luxurious suite waiting for you at one of the many resorts. If you want to spend your nights comfortably without breaking the bank, there are hotels and rooms available to make sure you sleep soundly.

Thinking you need to take a trip to Cancun? Give our Denver travel agency a call today and we’ll be happy to find the perfect vacation package for you!